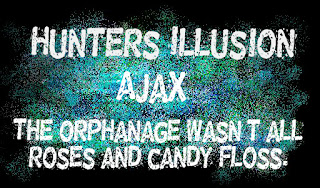 This is the first chapter of Hunters Illussion: The hunt begins. As it is still in the writing and editing stage some content may be changed or added to.

Hunter’s Illusion follows Ajax, an orphan, from the start of her training as a Fighting Officer to a fully trained and experienced one. It is written by Cindy Hargreaves and is based in her world of Organ City. It will be released first as a series of short stories and then as a complete novel in eBook and paperback forms.
There will be a minimum of five short stories... depending on the reader’s response and the authors creativity there is a possibility that there may be more. Each will retail for $1.30 NZD.

The van from Organs Orphanage stopped long enough to drop the girl and the luggage off at the entrance to the big training academy. It was just as well the girl had no wish to say farewell to any of the van’s occupants; because as soon as the door to the luggage compartment was closed the van took off; leaving the girl in a cloud of dust.

With a sigh, she picked up her suitcase and raised the handle and then bent and picked up her scruffy backpack and started the long walk up the driveway to the academy. Cars and bikes passed her as she walked, none stopping to see if she needed a lift. She did hear laughter as some of the cars passed her, but she didn’t take offence; she was used to that by now. Laughter, cruel jokes, other kids being mean. The orphanage wasn’t all roses and candy floss.
By the time she made it to the sign in desk, she was hot and sweaty and she really wanted to be able to drink some water. She would have to ask where she could buy some from; she had coin that she had saved up from her job at the bakery, that’s how she had managed to save up the money to go to this school. Since she was old enough to walk and talk she had been doing jobs for people for money.

Unlike the other kids in the orphanage she had saved it and not wasted it on candy and fizzy drinks. It was good that their economics teacher Mrs Hallbroom was open to helping the little ones. It was her that taught the girl how to look after her money. By rights Mrs Hallbroom could have swindled her, but she had seen something in the little three year old.

In fact Mrs Hallbroom had been the girls first regular clients. Before class began she would get the girl to put the heavy school books on the individual desks. She had a little book trolley that the girl would use.

The hard work had paid off, because here she was at the academy that would give her a future. Even if at this moment, she was a little overwhelmed by all the people, the bigness of the place, the noise.

As she looked around, she was a little envious of the people who were in groups and looked like they were having a good time laughing and chatting. She wondered what it would be like having that. Having a friend. She had never had one before.

Finally, she had made it to the sign in cue and waited for her turn. As she was waiting, she continued to look around. That was when she spotted a group of them. The officers! They were what she was here to become. Her Order would be Fighting Officer. It had been her dream for as long as she could remember. And the dream had come from well, a dream, well nightmare actually.

The line moved up and she was one step closer. Her palms began to sweat, this wasn’t from the heat, her nerves were starting to get the better of her. What if she wasn’t accepted at the last minute? What if something had gone wrong with her tuition payment? What...? She forced herself to stop thinking like that. Which was just as well since it was her turn to register.

Ajax stood in the doorway to the food hall, if she had bothered to look at the people walking past her she was sure that they would be laughing at her. Because she stood there like a goober and gawked. The room was massive so many tables, so many people, so much food.

She had a reason for standing there. She wanted to see how things were done. Her stomach was growling, but she was so nervous. What if she did something wrong?

Sighing to herself she merged with the end of the line, and didn’t understand why some people were so pushy. She made her selections and then because she couldn’t see how to pay for the food she taped the shoulder of the guy next to her. “Umm, sorry, how do we pay for our food and water?”

“It’s part of our tuition fee, the food. So you choose what you want to eat and drink and then take a seat,” the guy has a kind and friendly voice.

“Thank you,” she mutters to her plate as she goes over to choose her drink. And is stunned with the variety. She reads the names of the labels carefully almost desperate for some water, finally she saw what she wanted, grabbed the water and then went to go find a seat.

Most of the tables had only one or two chairs spare but she was pleased to see in the dark corner at the back against two walls was a table that no one was sitting at.

She had just taken her first mouthful of food when about twenty kids filled up the table all wearing a slightly different uniform to the standard one, and the shield was different.

She noticed that one of the guys was the one that told her that the food was free. When he noticed she was looking at him he winked at her. Making her blush and look back down at her plate.

“Oy you want a bread roll,” the guy next to her asks after elbowing her to get her attention.

“Umm, did you get to many?” Ajax asked and then felt like kicking herself as she realised how spastic that sounded. It was a relief that no one laughed at her dumb question.

“Cook gives us a whole basket full, freshly made, they are delish with just a little butter spread in the middle,” bread guy says.

Shyly she reaches out and takes the offered bun and uses her knife to spread some butter as she saw one of the other kids doing. And then takes a bite, and closes her eye’s as she takes in the new sensation of fresh bread and melted butter.

“Have you not had bread and butter before?” he asked.

“Not fresh bread, no, and butter never,” she replied.

“What type of bread did you have then?” his voice was incredulous.

“Two day old that the matron or other staff no longer needed,” she answered.

She shrugged and went back to eating, trying all the different things she had gotten. There was some she liked and others left a gross taste in her mouth. She tried not to listen in to the other kids conversation but it was a bit hard with them talking all around her. She made a mental note to find somewhere else to sit next time.

“You’re the chick that walked up the driveway right?” the first guy asked, speaking above the rest.

She nods, and carries on eating, trying the yucky cauliflower with a little of the sweet honey sauce. That made it slightly more edible. Even though there was food on her plate that she didn’t want to eat, she ate it anyway. Being hungry and without food was not how she intended to live from here on out.

“Do you hope to be picked for the Grinshaw programme?” her lunch companion asked.

“Maybe, if I knew what that is,” she told her food.

There was a shock silence all around the table.
Posted by Unknown at 18:52